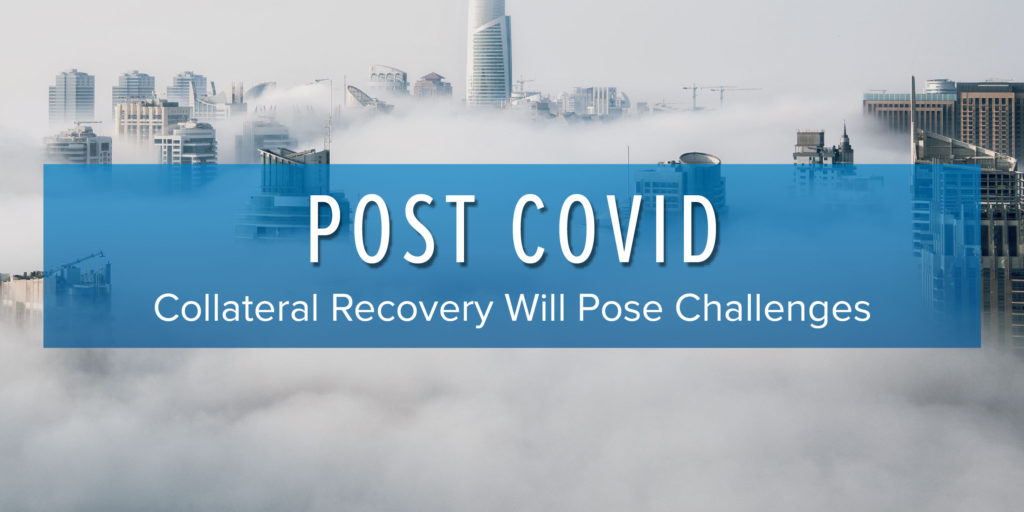 When the COVID shutdown began, most lenders issued moratoriums on repossession activity and began issuing payment deferrals to customers on a large scale.  Several states also issued executive orders reducing or eliminating a lender’s ability to enforce their security interests during the crisis.  As a consequence, over 90% of the repossession industry’s revenues vanished within just a few weeks.

With most states reopening now, and many of the executive orders expiring, the majority of lenders have started to recover collateral where they feel it prudent to do so.  However, the chain of events that started due to the crisis has created a series of challenges that lenders must carefully navigate as they pursue recovery of collateral relating to loan/lease defaults.  The balance of this article will provide additional insight into these issues.

If your institution has exposure on a regional or national basis, it is critical for your compliance team or repossession management firm to stay current on federal, state and local regulations.  Currently, the following states are prohibiting involuntary repossession on titled assets:  Massachusetts, Maryland, Washington DC, Illinois and Alaska.  A number of others states have not issued official limitations but the governors in those states have asked lenders to voluntarily cooperate and not to repossess.

There are also efforts underway in some states and local jurisdictions to place further restrictions.  Most notably, AB 2501 in California would have restricted repossession activity until the end of 2021.  Fortunately, this initiative was defeated but we probably have not seen the last of it.  Similar efforts are brewing in other states and some local jurisdictions are considering similar actions.

Finally, the threat of federal restrictions still exists.  Efforts have been made to formalize restrictions during the debate around each stimulus bill so far.  With discussion of an additional stimulus bill underway, one can assume that those efforts will continue.

Imbalance Between Supply and Demand

The current situation has resulted in some repossession agencies having to permanently cease operations.  Many were operating on very thin margins with no capital cushion whatsoever.  The sudden wave of moratoriums was the “straw that broke the camel’s back”.   The combination of fewer qualified agents, and an expected surge in the demand for repossession services, is likely to result in capacity shortages in some areas.  Many lenders will find it more difficult to get proper attention on their cases and will likely need more vendors to manage the issue than in the past.

Several factors are likely to put upward pressure on repossession related costs.  First, the aforementioned imbalance between supply and demand will certainly exert pressure.  Additionally, we are seeing an increase in consolidation activity among agencies, especially in certain key markets.  This will translate to less competition in those markets which will inevitably add pressure.  Finally, repossession agencies are experiencing increased costs relating to the proper handling and storing of personal property recovered in a repossession.  Many are seeking higher fees in order to offset the cost of the required PPE and higher labor costs associated with a slower process.

One of the areas that we are the most concerned about, especially in the early days of the recovery, is the adequacy of insurance coverage carried by agents.  We have seen a marked increase in situations where agents have either reduced or eliminated coverages to deal with the sharp reduction in cases.

Repossession can be a messy business and comes with a multitude of risks and exposure.  To be properly protected, there must be a variety of different policy types with adequate coverage levels.  Keeping track and really understanding this issue is difficult but cannot be taken likely.  If you utilize a repossession management firm, seek to understand how they are managing this issue.

It is likely that the COVID-19 situation will result in an increase in repossession related lawsuits filed by customers.  Indeed, we are already seeing evidence of a strategy emerging by Plaintiff attorneys to target the issue, especially in jurisdictions where restrictions were issued.  This is why it is vitally important to stay abreast of all regulatory developments where you operate.

The next several months will be challenging to say the least.  Make sure your internal team and your external collateral recovery partners are ready.

Michael Levison is the Chief Executive Officer of Resolvion, one of the largest repossession management companies in the nation.  His firm, which has a division devoted exclusively to commercial equipment and vehicles, oversees the recovery of 200,000 units annually.

Get a copy of the above article to share with your colleagues. Enter your information below and receive a free PDF.