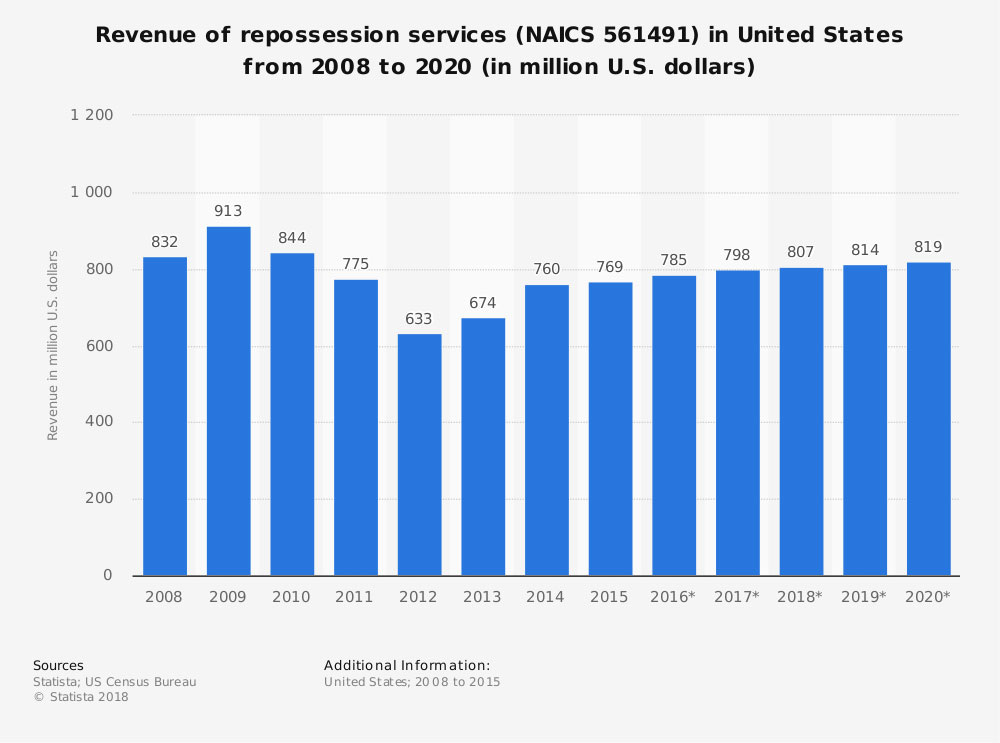 The repo industry is involved in the business of repossession. When consumers default on a loan, such as a car loan, then a lien on that item can be activated. The consumer can be ordered to turn the product over because of the lien.

Most owners refuse to do so. That’s where the repo industry steps in to help. It often focuses on the legal remedy that is called “replevin” in markets where self-help repossession is not allowed or cannot be completed safely.

The repo industry can also help owns recover items that they may have leased or rented to others. If an item was borrowed, with or without permission or compensation, it may be possible to repossess that item as well.

#1. Many of the firms that are involved in the repossession services industry in the United States are independent contractors or sole proprietors. There are more than 11,000 active firms within the industry right now, yet just under 17,000 direct employment opportunities. (IBIS World)

#2. For the 5-year period ending in 2017, the repo industry experienced an annualized growth rate of 3.6%. That results in a total market value of about $1 billion each year. (IBIS World) 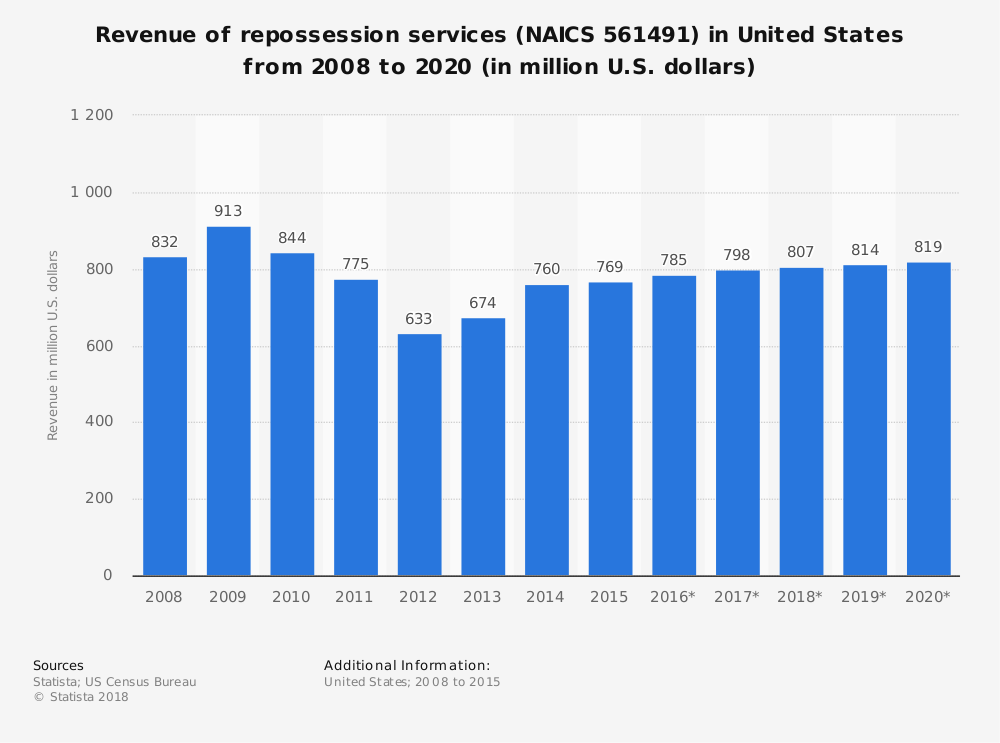 #4. Since 2012, the automobile segment of the repo industry in the U.S. has recovered a minimum of 1.3 million units annually. (Auto Remarketing)

#5. Automobile sales in the United States account for 20% of retail sales which occur. In 2016, Americans had accumulated almost $1.2 trillion in outstanding automobile loan debt. That was a rise of 9% in 2015 and 13% above the debt carried in 2005, just before the economic crisis. (Quartz Media)

#6. Despite the sharp rises in automobile debt, the number of vehicles on American roadways increased just 1.5% in the past 12 months. Total active vehicle counts have only risen by 9% since 2005. (Quartz Media)

#9. The number of subprime auto loans in the United States accounts for almost 25% of all auto loans, with a total value of nearly $300 billion. There is more subprime debt in the auto industry today than there was in 2007, when the economic crisis began. (Quartz Media)

#10. From 2003-2009, the number of publicly reported incidents through self-help repossession involved six fatalities, more than a dozen injuries and arrests, and three incidents where children were towed away with an automobile. (NCLC)

#11. There is a $2.2 trillion daily turnover in the rep market. U.S-backed securities account for 48.5% of the total value in the daily turnover rate. (SIFMA)

#12. More than 107 million Americans have at least one active car loan right now. About 6 million Americans with an active loan are 90 days or more behind on their car payments. That puts them in danger of a possible repossession. (CNN)

#13. Many of the repossessions which occur in the subprime loan industry are with interest rates that may be over 20%. Once a repossession occurs, it affects more than their ability to obtain another car. It can also affect their qualification for affordable housing. (CNN)

#15. The share of auto loan originations accounted for by individuals with a credit risk score below 620 was more than 30% at the end of the last lending cycle. It is now 23%. (Manheim)

#17. The share of used vehicle loans that have repayment terms of 61 months or more is nearly 60% of all loans issued today. (Manheim)

#20. The top 10 lenders control about 30% of all auto financing in the United States. (Manheim)

#22. Auto loan refinancing companies may offer refinancing with a minimum of 6 on-time payments made. A loan balance of at least $10,000 is usually required as well. (Super Money)

In the United States, the repo industry is bound by laws that require a breach of the peace to not occur during the repossession of property. If the peace is disturbed, then the repossession will be reversed and those involved will be liable for damages, which may include the lienholder.

All 50 states allow some version of a repossession to occur if a debtor is in default and a breach of the peace does not occur. Just because a repossession order comes through does not guarantee a repo occurs. In the peak year of 2009, when 1.9 automobile repos were successfully handled, there were 3.1 million orders issued.

As debts continue to rise once again, the opportunities for repossession services to be required will also rise. It creates a difficult position for consumers, as they may be responsible for a debt balance, even after the repossession occurs. For that reason, it Is important to be in discussions with a lienholder immediately if a payment will be past due.