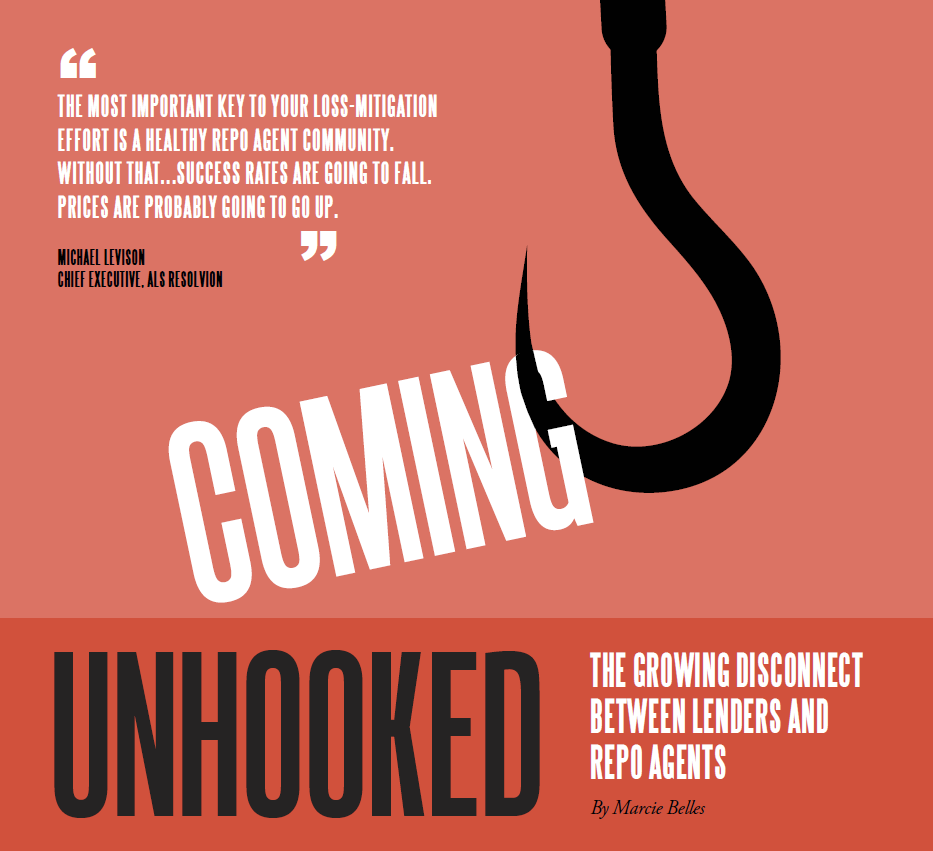 With auto loan delinquency rates rising, it would seem to be a good time to be a repossessor. But that’s not the case. Tow truck and vehicle insurance prices are climbing; license, bond, and other compliance-related costs are increasing; technology spending — to boost internal efficiencies and maintain a competitive edge — is growing. Meanwhile, lenders seeking to reduce loss-mitigation costs are trimming repossession fees. Combined, these factors have put the squeeze on repossession companies and led hundreds of agencies to shut down.

The effects of repo agencies’ intensifying struggle to build profits will reverberate through the auto finance industry, said Michael Levison, chief executive of repossession management firm ALS Resolvion. “The most important key to your loss-mitigation effort is a healthy repo agent community,” Levison told lenders at the Innovations in Recovery Summit sponsored by ALSR in September. “Without that, our success rates are going to fall. Prices are probably going to go up.”

Lenders and repossession companies, however, are starting to reevaluate the way they work and experimenting with new business models.

Every year for the past decade, expenses have climbed for repossession firm Absolute Recovery. Trucks have become more expensive, diesel fuel prices have risen, and insurance has become harder to get.

“The cost to run a repo business has gone up exponentially,” Brent Hulderman, owner of Charlotte, N.C.-based Absolute Recovery, said at the recent repossession and skiptracing event. “Our costs have gone [up] double, triple over the past few years.”

Compliance requirements, too, have become stiffer and technology investments more vital to these firms. “To run more efficiently and actually make money at our business, we put a ton of money in technology,” said Michael Pletz, owner of Pittsburgh-based A.L. Recovery. “We spend thousands and thousands of dollars on compliance, because [a compliance violation] could put us out of business.”

Despite these rising costs, fees paid to repo agents are shrinking as lenders seek efficiencies in their loss-mitigation departments. “As our costs keep going up, repossession fees have not,” Hulderman said. “We really do need more money to compensate.”

In the past five years, the number of repossession services companies in the U.S. has declined 3.1% to 11,007, and the number of people employed at those businesses has dropped 1.3%, according to research company IBISWorld. Levison pointed out that the hundreds of agencies that have gone out of business in the past couple years are a “real risk to our business and to this industry long-term.”

Though recovery agents seek more one-on-one interaction, lenders are increasingly embracing an indirect structure to assign repossessions. In the forwarder model, as it’s called, lenders parcel out repo and skiptrace assignments to management companies with hundreds of agents in their networks.

Hyundai Capital America, for one, has migrated to a forwarder model from a direct-agent model. “Unfortunately, what drove us to [the forwarder model] was the lack of technology,” said Marco Villarreal, the captive’s recoveries operations manager. “We’re still working on the infrastructure to be more nimble as far as our recoveries and who we partner with.”

Ideally, Villarreal would prefer a hybrid model that would allow the captive to set up champion-challenger testing to evaluate forwarder-versus direct agent performance. But Hyundai is still 18 months out on its system conversion, “so that prohibits us from what we want to do,” he said.

Last year, Wells Fargo Auto replaced its hybrid model with a forwarder model, on the heels of an effort to centralize 57 regional locations. “It helped us have some consistency and make it easier to be able to manage the relationship,” said Javier Solis, the bank’s vice president of third-party performance and strategy. “It doesn’t take away as far as the compliance requirements, but it allowed us to have better conversations, being able to monitor departments at a different level. Imagine trying to have that performance conversation for 400 direct agents.”

Wells Fargo is evaluating the results of the shift. “We’re just a year into it,” Solis said. “We’re still learning. We’re still developing. Ultimately, we want to make sure that what we do is protect our customer.”

While captives and national banks tend to rely on forwarder models, smaller lenders are more likely to employ a direct-agent structure.

United Auto Credit, for one, splits its recovery assignments between forwarders and repo agents. “We’re not that big, so we’re a mile wide and an inch deep across the country,” said Vice President of Servicing Mike Duke. “For a lot of the country we can’t build a relationship, because we have one repo in [a small city like] Farmington, New Mexico. We would need a forwarder.”

Duke prefers a direct-agent model, though, because it allows for more stringent compliance oversight. “I would like to have a little more control over the compliance that we have on these vendors,” he said. “We’re going to get dulled down by whatever the forwarder’s compliance program is.”

Also, the direct relationship allows for some give-and-take with agents. “In those relationships, I can pay my agent more and, sometimes, I can demand a little bit from the agent,” he added.

While lenders keep a tight rein on recovery metrics, repo agents have also cracked down on the accounts they are willing to work.

“We used to accept every assignment that came down the pike,” said Jeremy Cross, president of Kennett Square, Pa.-based repo agency International Recovery Systems. “We don’t anymore. There is a crisis right now of agencies. Agents are dying left and right. We can’t take every assignment. The higher the average revenue per assignment, the happier we are.”

North Richland Hills, Texas-based Hide and Seek Recovery has also become more particular about which assignments it will accept. “We pay attention to whatever efforts are going to be required post-recovery,” said General Manager Sara Patterson. “Are we going to have to transport it? Are we going to have to take additional pictures? Is there more compliance stuff that’s required? Is it something that we have to put extra people on to make sure that we can get the condition report uploaded within [the required amount of time]?”

Beyond the nitty-gritty, though, Cross at International Recovery Systems has the bigger picture in mind for the company’s forwarder and lender clients. “We want a partner, we don’t want a boss,” he said. “Having that personal relationship is key — not just for me, but for my staff.”

Additionally, funding speed is of utmost importance to Cross. “The next [consideration] is, How fast do we get paid, and how much do we get paid?” Cross said. “How valuable is that client? You want to be a priority to your agents? Make yourselves a priority.”

Cross and Hulderman encouraged lenders and forwarders to call their agents periodically and to be clear about expectations. For instance, Chase Auto Finance provides Cross with a scorecard every month. “The vendor manager calls us once a quarter and does a review,” he said. “‘This is how you did: You did a good job here; you didn’t do such a good job there. How can I help you improve?’ Have that communication. Manage from your metrics, from your scorecards.”

That competition drives repo agencies to improve. “If I see on a scorecard that another [agency] is right there on my heels, you better believe that I’m pushing to make sure that we’re better next month,” Hulderman said. “Competition makes everyone better.”

Ultimately, the health of the recovery market will hinge on lenders and agencies working together, ALSR’s Levison said. “If we just take the attitude that that’s their problem, we’re going to end up regretting it,” he said.