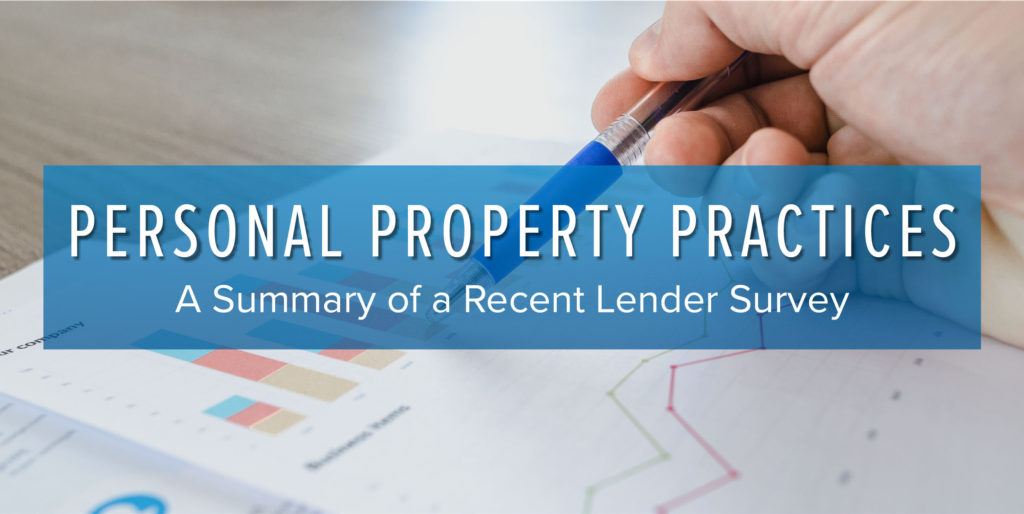 In the Fall of 2016, the Consumer Financial Protection Bureau issued their Supervisory Highlights which illuminated their opinions on the issue of charging borrowers for personal property inventory, removal and storage. Ever since, the lending and repossession world has been in a flux over how to manage the dirty, dangerous and unpleasant duty. To be specific in their own words, in section 2.2.1, titled “Repossession fees and refusal to return property”, they stated “State law typically requires auto loan servicers and repossession companies to maintain borrowers’ property so that it may be returned upon request. Some companies charge borrowers for the cost of retaining the property.”

Previous to this statement, borrowers had almost always paid these fees directly to the recovery agencies and adding the fee to the balance was not a common practice. It’s legality in most cases is not explicitly allowed by contract. Since the personal property fee is in some states regulated separately from repossession fees, it could be of some legal opinions that it is not all inclusive to the repossession fee, which is explicitly allowed.

Things got even messier when they stated; “Even when the consumer agreements and state law may have supported the lawfulness of charging the fee, examiners concluded there were no circumstances in which it was lawful to refuse to return property until after the fee was paid, instead of simply adding the fee to the borrower’s balance as companies do with other repossession fees.“

“In response to examiners’ findings, one or more companies informed Supervision that it ceased charging borrowers to store personal property found in repossessed vehicles. In Supervision’s upcoming auto loan servicing exams, examiners will be looking closely at how companies engage in repossession activities, including whether property is being improperly withheld from consumers, what fees are charged, how they are charged, and the context of how consumers are being treated to determine whether the practices were lawful.”

While acknowledging that this was a required duty, they have chosen the opinion that the state laws already in place should be overridden and a process adopted that could run afoul with legal opinion in civil court matters. In all of this, they left the lending industry in the belief that the simple answer was that no one could be charged for this. The contradictions posed by their opinion and the threat of their wrath created by this is fairly well illustrated in our August 2021 poll that we conducted amongst our participating lenders asking what their current personal property fee practices were. 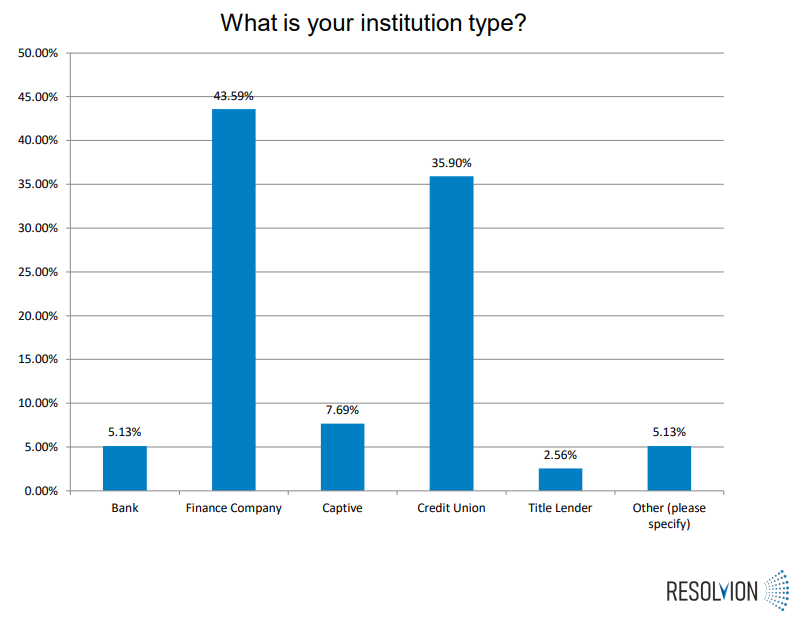 Breaking our participants down by type, we found the above demographics of participants. Combined, Finance Companies and Credit Unions comprised over 79% of the respondents. 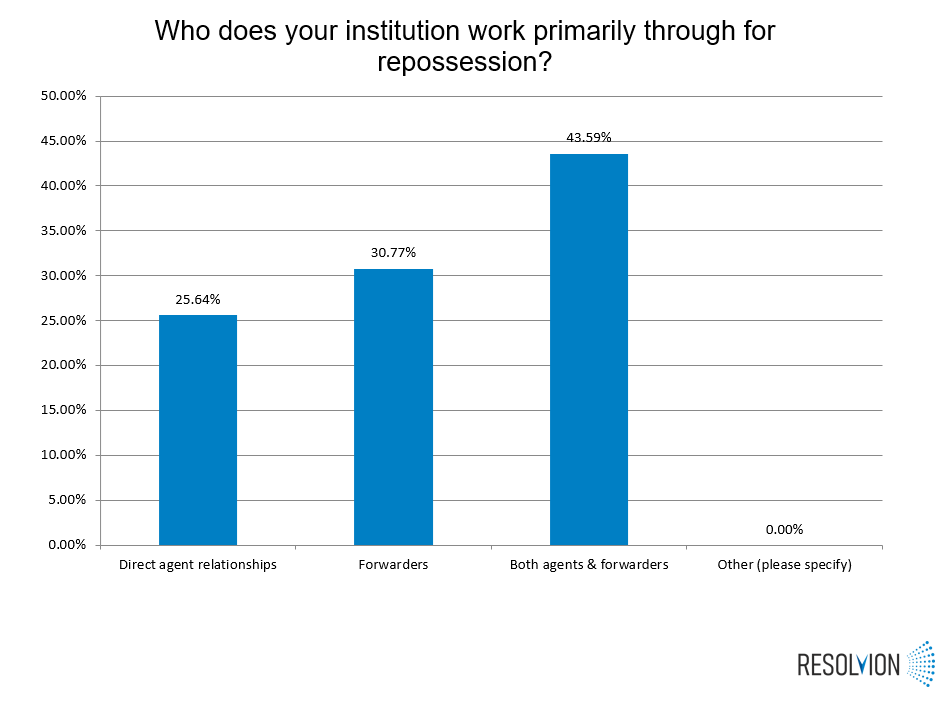 Breaking down assignment practices first, we found that amongst all of the lenders that participated, almost 44% used a mixed direct agent and forwarder model with the forwarder only strategy in second at almost 31%. Breaking it down more, we found; 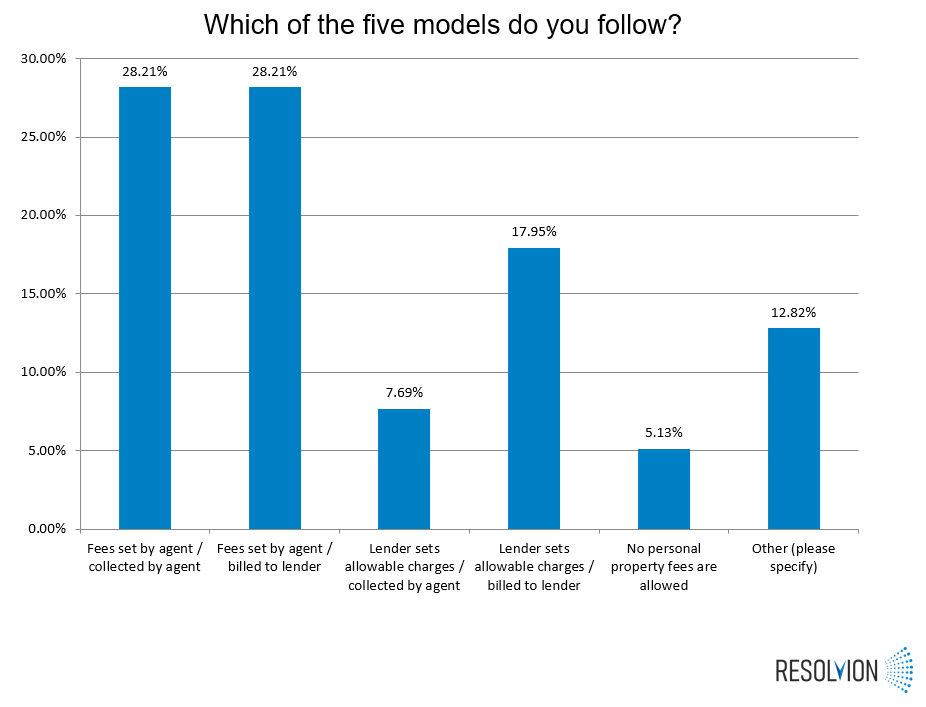 In response to the issue of setting and collecting fees, the questions were broken into a range of practices as shown above. Regardless of the CFPB’s instructions, 28% report that they still allow the agency to collect the fees from the borrower. Still, a combined greater than 25% maintain control of allowable fees and a greater percentage allow the agent to bill them and only 5% claim that they do not allow personal property fees to be charged at all.

Breaking down the results by lender type; 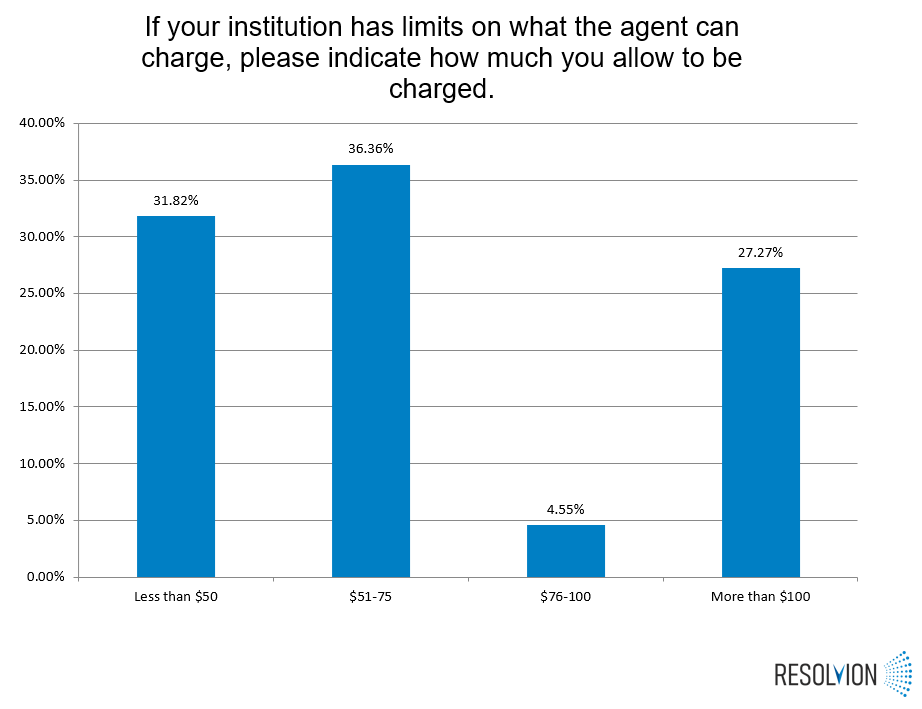 When posed the question of how much the lender allows the agency to charge, the highest percentage of respondents fell into the $51 to $75 range at 36%. In second was Less than $50 at almost 32%. Surprisingly, 27% reported that they allowed agents to charge more than $100.

Judging from the responses to this survey, it does not appear as though the CFPB guidance on allowing personal property fees to be billed to the lender and applied to the loan as a collection expense has fully caught on. Perhaps some of this may be explained by the contradictions between state laws on the matter and the CFPB’s opinion.

Another possibility is that the contract languages used in indirect loans, usually drafted and approved by the states, are not explicit enough for approval by the lender’s legal counsel. Either way, with almost 36% of the participants stating that they still allow the agency to collect the fees from the borrower, it appears as though a substantial population of the lending community has changed very little, if any of their fee practices pertaining to personal property storage fees.

Whichever course a lending institution takes in this matter is a legal matter best resolved with their own legal counsel. It is, however, the belief of Resolvion that the duties of inventory, removal and storage of a borrower’s personal property is a critical function of the repossession process. A duty that is dirty, dangerous, time consuming and one that the agencies deserve adequate compensation for performing.

We strongly suggest that all lenders review their current fee procedures with their legal counsel and develop processes that are compliant to the CFPB guidance as well as consumer friendly while at the same time respectful to the recovery agencies time and risk expensed in the process.