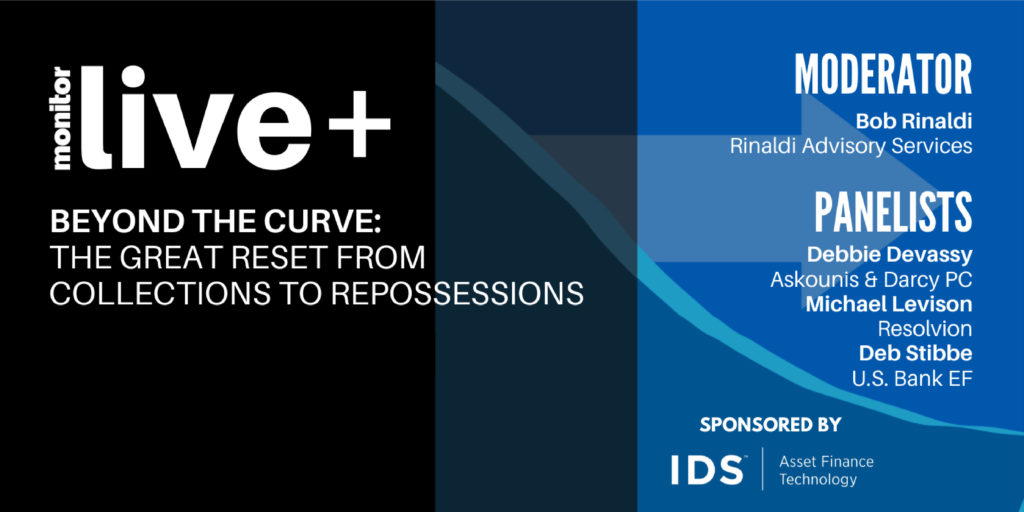 The purpose of this event was to gain a better understanding of the next steps and best practices for equipment finance companies as the beginnings of the COVID-19 recovery play out. Here are the top six takeaways from the conference:

It has become evident that COVID-19 has impacted some industries more than others. Industries such as “charter schools, churches, commercial real estate, event planners and the entertainment transportation (limos)” have taken a large hit, according to Stibbe. However, in recent weeks, she has seen increased business optimism as more states begin to lift stay at home orders.

The transition to working from home following the stay at home orders was a big adjustment for workers. Stibbe mentioned how the transition ultimately had an impact on her team’s productivity. Recently, U.S. Bank Equipment Finance increased its default management team by 50% in addition to transferring staff between divisions to help over the next 60 days.

Overall, Stibbe said businesses has returned to normal somewhat , but some parts of business operations will likely stick as a permanent, such as increased workout scenarios.

“With so much uncertainty, it is hard to know what the next few months are going to look like,” Stibbe said. “But more of our customers coming off deferrals in July will help us get a better feel for how long it is going to take.”

Devassy explained that jurisdiction determines which courts are open and how they are operating. She said the real issue lies in how quickly the courts are responding, and if law firms must hire private process servers since many sheriff’s offices are not serving legal documents right now.

In addition, many courts are currently facing a hefty backlog. Devassy predicted that end dates for litigation may take three additional months longer than average since judges are unable to hear cases. Her advice for leasing companies was clear: do not delay in filing suit.

From a repossession standpoint, Levison thinks these delays will have a negative effect on the percentage of recovery. Levison also pointed out that the older a delinquency is, the harder it becomes to find assets.

Devassy emphasized the importance of processing mail because the 90-day filing window for debtors to file under Chapter 11 has made the process move quickly, which has the potential to cause great harm for the creditor.

Currently, Devassy has seen an increase in Chapter 11 and 7 filings.

While not as many as originally predicted, Levison said many recovery agencies have been forced out of business and some have faced a large fallout. This is partially due to agencies struggling to bring staff back and because government assistance programs have people earning more money than before. As a result, still-standing recovery agencies now have less competition.

“We expect a disconnect between demand and capacity,” Levison said. “Agencies will be cherry-picking.”

Levison also pointed out issues in the repossession process, including the handling of personal property and repossession agents with no insurance. He expected to see more moratoriums in the future, especially in regard to repossession activities that took place in geographies where the practice was prohibited. Levison believed this could ultimately constitute a breach of peace.

The panelists anticipated an influx of collateral inspection. Levison remarked that the information that comes from the inspections is important in determining risk. Stibbe added that many clients want to know the condition of their equipment.

Stibbe talked about handling deferrals on a case by case basis. She expects to see it unfold as a workout situation and does not plan on changing the structure of contracts within the operating system. By asking a lot of questions, Stibbe and her team are able to get a better understanding of what relief is needed from her clients and why.