Resolvion Executive Vice President Jose Mendiola didn’t mince words when asked by SubPrime Auto Finance News about what it’s been like for forwarding companies and other operations associated with recoveries since the pandemic began. “Repossessions being off almost 50% has put a lot of pressure on everyone in our industry,” said Mendiola, who then elaborated about what conversations have been like between Resolvion and its clients that provide auto financing. “Most discussions are centered around a sense of normalcy and when it’s going to come. I think what we’ve learned so far is how difficult it’s been to predict,” he continued. “Going back to last year and everyone initially thinking delinquencies were going to skyrocket and repossessions were going to come in waves, that certainly didn’t happen. Now you do a complete 180, and it’s record low delinquencies, repossessions are off and people asking when are they going to come back. Whether it happens like this year or the beginning of next year, it’s a bit of a moving target. “Everybody’s got their predictions. It seems to be pointing that during the next six to nine months things should start to get back to some pre-pandemic numbers,” Mendiola went on to say. SubPrime Auto Finance News reconnected with other repossession management companies to get their assessments. Chris McGinness is CEO at Primeritus Financial Services. “While many companies hunkered down during the pandemic, we made a conscious, strategic decision to utilize this lull period to develop and invest in enhancing our processes, technology and company overall,” McGinness said. “We have been focused on every aspect of the business, with a goal towards optimizing our servicing and strengthening our partnerships. “This top down and inward evaluation approach has allowed us to fair well during the pandemic and sets up a solid foundation to continue to lead the industry in nationwide repossession, skip-tracing and remarketing services once things settle and business is back to ‘normal,’” McGinness continued. PAR North America president Lisa Scott described situations created by the pandemic that impacted how forwarders do their jobs. “First and foremost, in order to protect our employees, in just a matter of days we moved to a work from home model with the exception of those functions which necessitated work from the office. It was a surprisingly seamless transition and the team leaned on various tools for virtual communication,” Scott said in comments shared with SubPrime Auto Finance News from PAR’s parent company, KAR Global. “Externally with repos, we saw lower volumes of assignments and more recycled recovery work creating more declines for previously worked assignments. These assignments also require more skip resources to locate and contributed to a lower recovery rate overall,” Scott continued. “Additionally, we saw increased redemptions, stemming from stimulus checks, larger savings plus our client’s willingness to work with their customers.” 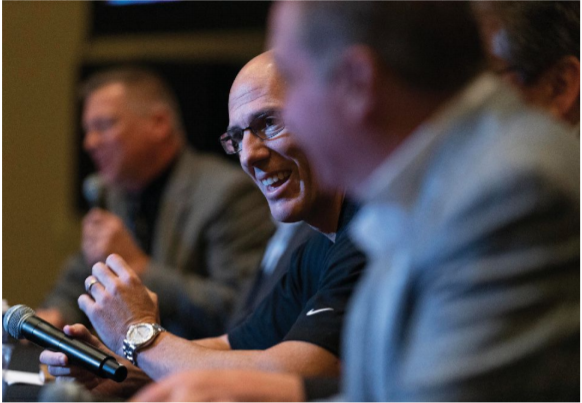 Resolvion EVP, Jose Mendiola, is pictured during a panel discussion during the 2019 Used Car Week conference in Las Vegas

Just like Resolvion, Primeritus and PAR have engaged with their finance-company clients throughout the pandemic. “Communication with our partners has been very collaborative albeit slightly more challenging during this time,” McGinness said. “With so many variables affecting the economy and thereby the industry, trying to plan and forecast has been like trying to hit a moving target. “Many times, information and plans will change rapidly due to new developments or shifts in the economy and we have learned to be more flexible than ever before. Despite these challenges, we feel communication has been in good faith with everyone trying to collectively plan,” he continued. And Scott over at PAR added these perspectives. “At the onset of COVID, I think our communication with partners was top of the line,” she said. “We were all in unchartered territories and we relied on a great deal of transparency and communication to work through changes. Now, as restrictions have lifted, we are still striving to provide that high level of communication. “We are hearing customers requesting increased insight into what is happening on their accounts, faster reporting time of repossessions and a heightened awareness around customer complaints,” Scott went on to say.

No matter which forwarding company a finance provider chooses, it’s a repossession agent who must secure the collateral. And forwarding companies are keeping close tabs on their network of agents that also have been pinched during recent months. “When the pandemic first started, there was widespread speculation that a large percentage of agencies were going to go down. But we haven’t seen that. Closures have ranged between 5% and 10%,” Mendiola said. “We have seen some consolidation activity. And with consolidation, that’s something to keep an eye on if you potentially have a lesser amount of agents covering a wider territory, that could lead to pricing pressure down the line,” he continued. “What we need to watch is the longer it takes for the industry to recover to pre-pandemic numbers, the higher likelihood of more agency closures. And nobody wants that. “It’s important to have a healthy auto finance industry is to have a healthy nationwide repossession agent network to curb some of the risk in the lending environment. That’s something we need to monitor over the coming months,” Mendiola went on to say. McGinness described another part of how repossession agents are pivoting their strategies in order to be more efficient. “In 2019, the industry was riding a wave of volume that suddenly crashed in early 2020. The sudden shutdown for several months and gradual restart has caused many agencies to reevaluate their business. While some repossession companies have closed down, those that have stayed open are paying much closer attention to their revenue and profit opportunities,” McGinness said. “This has led to a shrinkage in coverage areas to save fuel, reduction in ancillary services such as LPR scanning, more sophisticated and efficient routing of drivers and a focus on opportunity cost. “We have seen repossession agents become more selective of the assignments they are willing to accept based on revenue and profit margins,” he added. Scott shared similar observations. “PAR has been fortunate to be able to maintain strong levels of coverage throughout the country with one of the largest vendor networks in the industry,” she said. “Due to lower volumes many vendors had to make adjustments in terms of personnel, coverage areas, and other strategies to keep doors open. Sadly, we have seen vendors shut their doors due to direct impact of COVID-19.”

With regard to looking to see what might be happening next, that’s a task Kroll Bond Rating Agency (KBRA) tried to tackle this summer. KBRA released new research in August that analyzed the impacts of “skyrocketing” used-vehicle prices on auto finance credit performance metrics, as well as discusses future implications as the economy improves. Analysts expect supply and demand imbalances to abate gradually, which may negatively affect recovery rates on future defaults, leading to higher net losses. But KBRA pointed out that strengthened underwriting criteria amid the rising values may help mitigate this risk. “Unsurprisingly, when borrowers default on their loans (and their vehicles are repossessed and sold), higher resale values translate into higher liquidation proceeds. This outcome is playing out in securitized auto loan pools, which have exhibited elevated recovery rates over the past year,” KBRA said in the research report. Analysts determined that pool-level recovery rates — calculated as the total amount of liquidation proceeds divided by the total principal amount of contracts charged-off in each month — surpassed 90% in June, which is well above the 40% to 50% historical average. “However, elevated auto loan recoveries so far have been heavily influenced by lower charge-off rates in recent months,” KBRA said. “This was likely because of an influx of cash to borrowers through tax rebates and a third round of federal stimulus earlier this year, providing borrowers the ability to remain current or satisfy past due payments.” Analysts offered forward-looking perspectives based on the presumption pandemic-related supply and demand imbalances abate and used-vehicle prices soften. They pointed out that contracts originated in today’s market will likely experience higher loss severities and net loss rates compared to historical norms. To help mitigate this risk, analysts pointed out that many of the paper originators in KBRA-rated transactions have indicated that valuation-related underwriting criteria, such as loan-to-value (LTV) and debt-to-income (DTI), have been strengthened or maintained amid the rising values. “For example, many auto finance companies have maintained the same maximum borrower DTI knockout rules in their underwriting criteria,” KBRA said. “If the value of the financed vehicle increases more than the borrower’s income, the maximum financed amount will be capped to maintain DTI ratios within required thresholds. If DTI criteria is exceeded, the loan will be declined, or the customer would be offered a less expensive vehicle or require a higher down payment. “Additionally, many loan originators we interact with have reported increasing the down payment a borrower is required to make, helping to reduce initial LTVs,” analysts continued. “Only a handful of issuers to date have contributed loans on used vehicles that were originated since prices took off in March, as originators typically warehouse their loans for four to 12 months before they are sold into a securitization trust.”

Prepared For What’s Next

No matter how accurate predictions from firms such as KBRA might be, forwarders are trying to be as prepared as possible for what might be ahead. “By evaluating and investing in our services and technology during this period of industry low volume, Primeritus has set a solid foundation, and is prepared to handle an increase in volume, regardless if it comes as a singular large wave, or a gradual increase over time,” McGinness said. “PAR is in great shape and well poised to handle the rise in repossessions. We have a well-tenured team and have used the slower period to refine and make continual improvements to our overall operations,” Scott added. “We have one of the largest vendor networks in the industry. With that being said, we are hearing feedback from the vendor network indicating a struggle with staffing and resources, so service levels in certain areas may vary from previous benchmarks. With the stall in increased volumes, agents most likely won’t be in a position to increase staffing until volumes remain stable,” she went on to say.