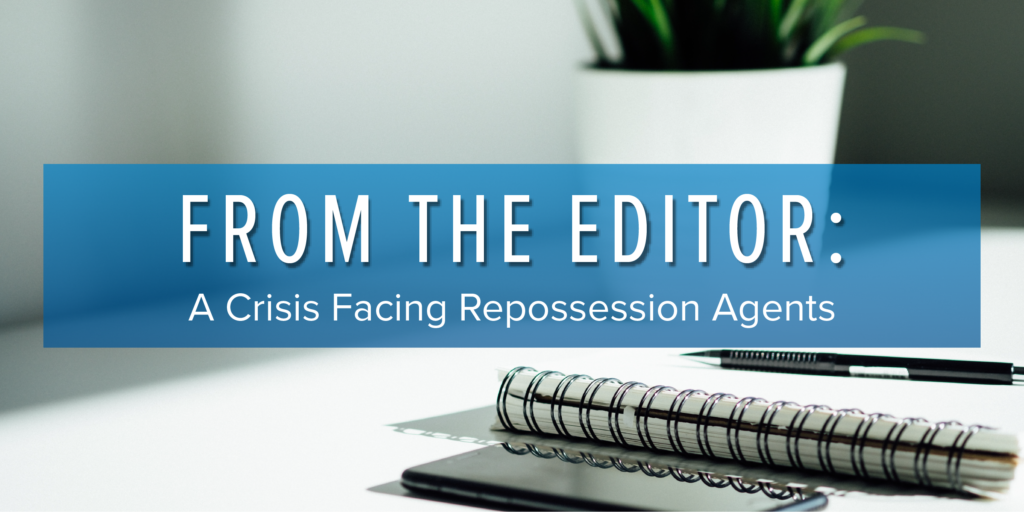 DALLAS – While the overall automotive industry might be relatively healthy, no doubt there are dealerships struggling with aged inventory, auctions stressed to keep commercial consignors satisfied and finance companies wringing their hands over compressed margins and wavering portfolio performances.

But if you would please indulge me for a couple of moments to convey what’s happening in what I contend is the most difficult segment for any individual or company to navigate in the automotive space — vehicle repossession.

Reputable repossession agencies want to complete the unenviable task of taking back vehicles when contract holders fail to stay current on payments.

But as Les McCook of the American Recovery Association clearly laid out during the Innovations in Recovery Summit hosted by Resolvion in late September, the dire straits repo agents now are encountering are unprecedented and could make the prospect of getting your collateral back all the more challenging.

“In the next 24 months, there will be significant changes in the industry,” McCook began during his time behind the lectern of this well-orchestrated event by Resolvion. Competitors shared speaking time in front of attendees, who all arrived from organizations vying to remain successful.

For the next 10 minutes, McCook spelled out a host of challenges repossession agents now encounter. Now before you dust off the notion by thinking that’s what McCook should do as the executive director of an association, please consider some of the matters he mentioned.

McCook indicated repossession agents are down to just two possible providers for liability insurance — one of the most important and expensive parts of their operational functions. And McCook said one of those providers is seriously considering the notion of no longer covering repo agencies as the commercial insurance world is having its challenges, too.

“The commercial auto insurance segment is headed to its ninth straight year of underwriting losses. When you stop and think about that, that’s a devastating number. We cannot bring a new insurance company. We literally are hanging on to one by a thread right now because we have been creative and finding solutions,” McCook said.

“There’s a possibility that an insurance carrier will not even cover industry in California in the next year and half,” he added.

McCook noted there are 67 fewer licensed repo agents in California than there were just three years ago. In Florida, the number of licensed agents is down 23% during that span.

Be it in California, Florida or any location in between, what McCook discussed next gave me pause as to how truly challenging — and dangerous — repossessing vehicles can be. And I’m not referring to an irate contract holder storming out of a residence or workplace brandishing a weapon as an agent is trying to recover the collateral.

Before the Resolvion event, McCook asked ARA members to send pictures of vehicle conditions and the personal property within these units from assignments completed in just the previous five days. McCook flashed a couple of pictures on the presentation screen. To say they were graphic is an understatement.

Spoiled food, illegal drug paraphernalia, soiled hygiene products and containers of elements likely from the entire periodic table were just some of visible material. And as McCook pointed out, repo agents are mandated by federal and state regulations either to store or appropriately dispose of that property. And oftentimes, agents must do it without much compensation, if any at all.

He added about the images he received from ARA members, “The things that I got back in just within five days were just unbelievable.”

“This is a cost burden that I don’t think being considered into a marketplace. And again, if you want to keep the viability of the business model that we’re in today, someone has to stop and pay attention to what’s happening on the other side of the fence, that what hardship are you putting on them, what burden you are putting on them that they cannot have a sustainable relationship with your company long term,” McCook went on to say.

No doubt, answers to these challenges require more than just throwing money at the problem. McCook probably said it best: “That’s why these meetings and discussions are going to be very important in the near term to have success and viability in the long run.”